Christopher Nolan’s Batman sequel, The Dark Knight Rises, brings one of Gotham City’s most infamous feline villains The Catwoman out of the comic books and back onto the movie screen. Not surprisingly, she is a popular character for Halloween and now you can dress up as Anne Hathaway’s Catwoman for this season! You can also shop for other versions of Catwoman Halloween costumes for women and girls. There are a variety of different Catwoman costumes for sale such as the ones from Halle Berry’s movie Catwoman and Michelle Pfeiffer’s ’90s film Batman Returns. The classic comic book style Catwoman costumes include the Gotham Girls DC Comic’s edition of Catwoman available in both women and children sizes.

If you are shopping for other Halloween costumes based on Gotham City’s most infamous women villains, check out our Harley Quinn page by clicking on the image to browse through the new different types of costumes available this season!

Amongst superhero fans, the Catwoman is one of the most famous or notorious female villains from the Batman comic book, movies, and television series. This popular super villainess has been played by numerous famous actresses such as Eartha Kitt, Lee Meriwether, Julie Newmar, Halle Berry, and Michelle Pfeiffer in movie and television adaptation of the DC Comics Batman stories. The character of Catwoman was created by Bob Kane and Bill Finger. She was known as Selina Kyle who made her debut in the 1940 comic book Batman #1, playing a mysterious cat burglar who became Gotham City’s number one jewel thief who loved high stake thefts. Her character was a femme fatale type that attracted Batman but this attraction only brought trouble for the Dark Knight. Catwoman is just one of many female villains of Gotham City. Check out our other women outfits such as Poison Ivy and Harley Quinn costumes on our other pages on this website. 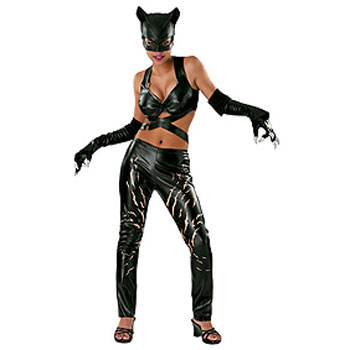